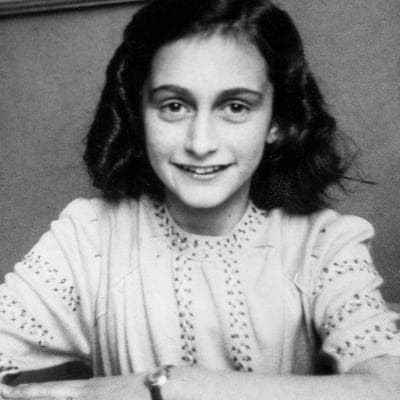 On June 12, 1929, Anne was born in Frankfurt am Main to Otto and Edith Frank, a fairly wealthy family, but the global financial crisis brought Germany to its knees.At this moment Adolf Hitler rode discontent by blaming the Jews for the country’s collapse, obtaining the violence and intimidation against Jewish families began almost immediately, but Messrs Frank did everything possible to preserve the serenity of Anne and Margot, their elder sister. The air, however, became increasingly heavy and so did Otto, who had accepted a work assignment in Amsterdam, he set to work to be joined in Holland by his family. In December 1933 Edith, Anne and Margot left Germany. In Amsterdam the Franks found some peace of mind: Otto directed a company that traded pectin and the 2 girls attended school like all their peers. Both parents were very attentive to the education of their daughters and Otto himself owned a library in Germany that attracted the interest of Anne, a voracious reader who by now had learned the local language and began to write down her thoughts on paper. In 1939 Hitler attacked Poland starting the 2nd World War and the spirits returned to stir. Holland declared itself neutral in the conflict, but the Netherlands were right on the path traced by the German generals to attack France; many feared an invasion, which then took place.In May 1940, German troops occupied Amsterdam and the Frank they found themselves living in an anti-Semitic country; with the arrival of the Nazis, the situation for Dutch Jews worsened. Suddenly Anne and Margot were unable to return to class; while father Otto, who had opened a second business in the field of salts and spices, had great difficulty in maintaining the leadership of his business, since the racial laws prevented Jews from running them. In the following years, arrests and violence became frequent episodes and Anne’s father began to set up a shelter in the back of his company on Prinsengracht Street at number 263On July 5, 1942, a letter arrived at the Frank house: Margot was summoned to report to the authorities to be transferred to a labor camp and if she refused the whole family would be arrested. So the Franks hid in the secret apartment behind a sliding bookcase. The escape was a shock to Anne, but she found solace in a notebook she had been given for her birthday, where she began to recount the difficult life in the retro “and the continuous emotions due to such a strange and surreal situation. The Van Pels and the dentist Fritz Pfeffer lived in the Prinsengracht apartment. During the day they did not have to make any noises so as not to make the neighbors and workers working on the other side of the walls suspicious.The only contact with the outside was with Otto Frank’s secretary, Miep Gies, her husband Jan Gies, Victor Kugler, Johannes Kleiman, Elisabeth “Bep” van Wijk-Voskuijl and Johannes Kleiman. On August 4, 1944, an unknown informer revealed the hiding place to the Nazis and all the occupants of the apartments were arrested and deported. The soldiers ransacked the building but when they left, Miep Gies managed to retrieve the papers written by Anne. and the Van Pels were sent to Auschwitz and separated from there: Edith died in January 1945, while Anna and Margot contracted exanthematous typhus and died one after another in February 1945; only Otto Frank survived the war. he discovered that the entire family had been exterminated and Miep Gies handed him what he had saved from the day of his arrest. In 1947, after correcting and revising his daughter’s writings, Otto Frank published the first version of the Diary entitled “The back house”.

Reflection:On the occasion of the Day of Remembrance, January 27, we did a research on Anne Frank, a Jewish deported to a concentration camp with her family: a Jew who fought with all her strength until the last moment; a Jew who had plans for the future and who never gave up hope. In short, a very special girl!During her deportation, she was forbidden to write and was unable to take her dear diary with her. But it is especially in this period that he gains courage and willpower.Despite her moral qualities, Anne Frank died in 1945 during her forced stay in the Bergen Belsen concentration camp. His death is unjust to us; he deserved to live, to see with his own eyes that new world he so desired. Above all, he deserved to realize his greatest dream: to have his diary published.We also find it unfair that some people, the Nazis, have committed so many atrocities against other human beings just because they are of another race, a “different” race. After all we are all the same! We must not rely on differences caused by skin color, way of thinking or religion! This causes us a lot of anger, all this absurd violence!These forms of racism were present since the times of the Reconquista, they are present today and will be present in the future as well, because sometimes men can be good, but many other times they can be ruthless.